As planned, the European Private Hospitals Awards Gala was held in Lisbon on June 23 and that week Portugal became the European capital of the private hospital sector. 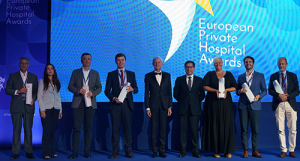 Those who were at Pátio da Galé or followed the ceremony via streaming were able to witness how we ended on a high note this process that formally began in January, drew 72 applications from 10 different countries and showcased the excellence of private hospitals in seven categories. There were 200 people present, representatives from private hospitals and the most relevant stakeholders, of which more than half were foreigners who wanted to share this moment with us.

The Gala of Galé will go down in the history of the private hospital sector and Health. It was the first time that we ventured to organise an event with this dimension and involvement. On this 23 June we had a demonstration of the commitment of private hospitals in Europe, but above all we were able to show that the private healthcare sector is very dynamic and is investing in the most appropriate solutions for the citizens’ needs. This was also a moment for everyone to come together and affirm ourselves as a sector.

For the success of the European Private Hospital Awards, organized by APHP and UEHP, we have to thank EY, who has been our partner from the very beginning, the members of the independent jury that evaluated the applications and the sponsors who joined us.

June 23rd was a big day, and it did not start late afternoon. It started early in the morning with a fantastic III Iberian Summit of Private Hospitals, where 95 people discussed the topics of digital transition in health and the relationship between providers and funders.

On Friday, June 24th, we held the UEHP council meeting where, among other topics, we addressed the implications of the war in Ukraine and the impact of price escalation of hospital costs and we had also the presentation on digital transition in health in Portugal, by SPMS.

With these initiatives, the private hospital sector has taken a step up. UEHP has gained visibility and notoriety. Private hospitals, in general, have now an additional reason to be recognised for the work they do and feel part of this network that every day strives for excellence in Health. That is the greatest prize.

This award distinguishes initiatives that focus on preventing the surge of health problems on an individual level, as well as the wide spread of communicable diseases

This award distinguishes initiatives that focus on promoting significant improvements in the healthcare service provided, as well as the clinical outcome for the patient.

This award distinguishes initiatives that focus on promoting a better workplace condition and environment, with proven results in optimizing the organizational performance and collaboration between professionals

A special award was also given to Romanian and Polish hospitals for their role in the humanitarian support given to the wave of refugees from the war in Ukraine. 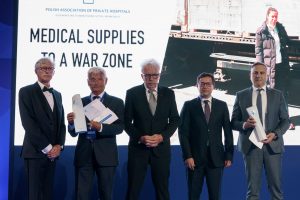