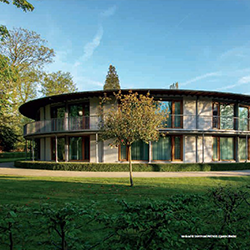 On 12 October 2022, the Sans Souci Clinic (Brussels) inaugurated its new hospital after a series of works lasting… 30 years. A unique project in that it combines a long tradition of mental health care with innovative methods, whose therapeutic success also depends on the spatial and architectural environment.

The story of a pioneering family

Mental health at the Titeca family is above all a family story, which began in 1909 with the takeover of the Maeck Nursing Home and the creation on a second site the following year of an open psychiatric section, the Sans Souci Sanatorium (Brussels), by Dr. Raoul C. R. Titeca, grandfather of Dr. Raoul J. P. Titeca, psychiatrist, and initiator of the reconstruction project.

The Titeca family has been a line of doctors and psychiatrists for more than a century, and over the course of six generations of doctors, five of whom are psychiatrists, has revisited the methods of treating patients with severe and lasting psychiatric disorders. Dr Jean Titeca (son of Dr Raoul C. R. Titeca), was one of the very first European electroencephalographers. Dr. André Titeca (another son of Dr. Raoul C.R. Titeca) introduced Sakel cures to treat patients with schizophrenia and electroshock therapy for mood disorders.

Dr. Raoul C.R. Titeca was also one of the pioneers of the so-called “open wards” in the 1920s, where patients are no longer confined to a closed environment and can be treated freely. Gradually, hospitalisations in open wards increased and today they concern more than 90% of the patients admitted to the psychiatric services in Belgium.

In addition, the Sans Souci Clinic embraced a new approach to care in the 1980s: psychosocial rehabilitation. The creation of supervised housing – even before it was officially authorised by the health authorities – enabled patients to live outside the hospital and to regain a foothold in society, while being monitored by care professionals over time.

“We discovered this concept in the field in the 1980s. Psychosocial rehabilitation in itself was not a new concept, but institutions around the world did not communicate with each other. We were lucky enough to be able to visit centres, particularly in Holland, and to be inspired by the publications of Boston University, a pioneer in this field. This movement developed in parallel with the deinstitutionalisation movement. Few establishments, like the Clinique Sans Souci, offer this form of care in such an integrated way, from hospitalisation to a return to life in society. We have the impression that we have set up a large machine, which very often gives excellent results, with patients who, after a few weeks or months, simply get better, in a sustainable way, i.e., they find a way of life that suits them at last“, says Raoul J.P. Titeca.

Architecture for the mind – a major renovation project 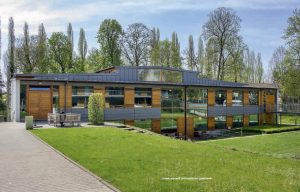 The Sans Souci Clinic had to be patient in its renovation: it took 30 years to obtain the funds required to build or rebuild all the buildings in the park. It was a long-term project that required changes of direction, such as becoming a private non-profit institution in order to obtain subsidies. Once allowed to project itself into the future, the management of Sans Souci set out to find an architectural model that would correspond to the vision of a psychiatric facility geared towards rehabilitation.

“We made it clear to the architect Philippe Samyn that the hospital should be designed in exactly the opposite way to a general hospital, where care is organised around the patient’s bed, whereas for the majority of patients, especially psychotics, the challenge is to get them out of bed! The objective was to create an environment that invites the creation of social links and supports our therapeutic orientation of opening up to the outside world,” explains Raoul J.P. Titeca.

“Designing something that will only be delivered 30 years later requires a humble and humanistic vision. We did not change the outline of the original plans, which I believe gives Sans Souci a touch of timelessness,” reports Philippe Samyn, the project architect. “I was guided by the client’s design and the spirit of the place, the genius loci, in the design of this building complex. At Sans Souci, we had an exceptional heritage of healthy, century-old trees, which we preserved. The buildings were placed between the trees and when you enter the clinic grounds, there is a sense of serenity that takes hold of you immediately. I have a great fondness for this project. Participating in the healing of suffering people has been our motivation from the start and I feel that I have designed something simple, but at the same time significant. ”

A long-term project in three phases 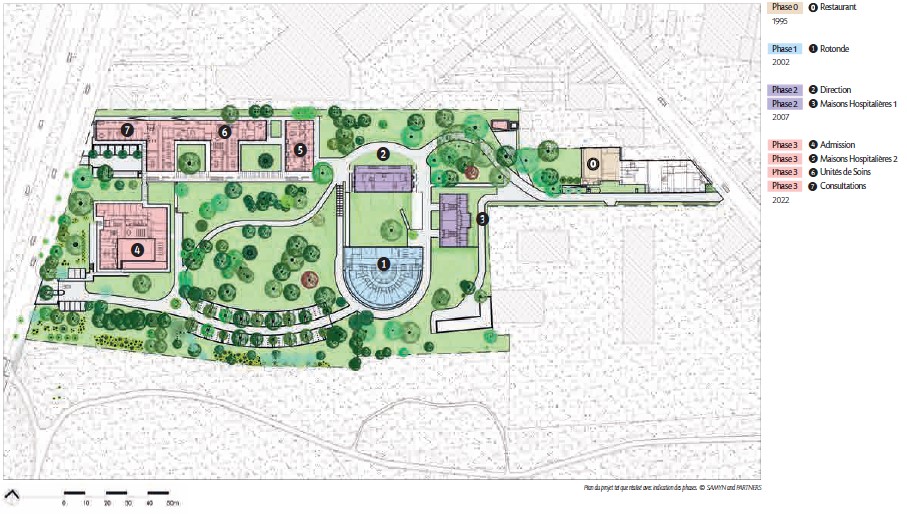 The reconstruction project was spread over twenty years and was carried out in three phases.

The first phase (1) was the construction of a horseshoe-shaped pavilion with a sort of atrium in the centre. The idea was to place the rooms on the periphery to preserve the privacy of the patients and make them feel safe, and to create a socialisation gradient in the progression towards the centre.

The second phase (2-3) was to extend the resocialisation path to an Activity and Leisure Club located opposite the atrium, on the other side of a green space, in a building that also houses the administration and the nursing station in charge of the hospital houses.

This phase was accompanied by the construction of a first series of four Hospital Houses (3), each of which can accommodate six patients, each with their own room, and each with shared bathrooms, a living room and a kitchen.

The originality of the model was that the nursing station located near the Club, some 20 metres from the houses, was placed at a distance, the aim being to encourage patients to look after themselves before asking for help. Usually, in hospitals, care is provided ‘automatically’; here, care on demand was introduced, the first step towards ‘real life’ outside.

The third phase closed the programme (4-5-6-7). It concerned: – the extension of the model of the houses (5) (second series of three Hospital Houses: two houses with 6 single rooms and one house with 12 single rooms), – the reconstruction of an Admission Pavilion (4) reserved for adjustments and short stays, – the construction of a building accommodating Care Units and Consultations (7)…

The overall space is designed as a hamlet, a place of life with its circulation areas, its central square, its more intimate spaces… Each part, even the smallest, is linked to the whole.