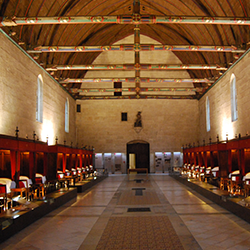 Changes in hospital construction as a result of the development of science and technology.

By Piotr Gerber, PhD in Science, Architt and Professor, UEHP Board Member

The hospital serves the purpose of treating and caring for the sick. The hospital buildings are to cope with this task. The designer of the hospital is to design an object whose task is to: create the appropriate space for conducting the medical process, create the best and safe conditions for the patient’s stay, obtain space for the effective work of medical personnel, obtain sufficient space for medical devices.

The requirements for hospital construction changed along with social development, the development of medical science and technology. Until the end of the 18th century, the hospital model underwent slight changes. For centuries, there was a system of large rooms, modelled on church naves, intended for a dozen or even several dozen beds placed on both long sides of sick rooms. The end of the rooms was usually an altar that gave the sick the possibility of continuous participation in prayers. “Healing the soul” was the basic element of therapy (Fig. 1). 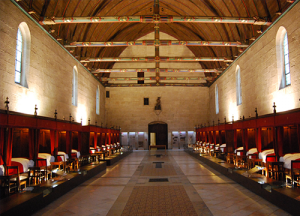 The model of the hospital developed over the centuries, based on the shape of the church nave, underwent various changes in the nineteenth century to be replaced by new solutions in the early twentieth century. Changes in hospital planning came with the construction of the new Hôtel Dieu hospital in Paris in 1866-1877. A new spatial layout of the hospital was created. In the axis of the foundation, the central entrance to the hospital was placed, which, through the administration building, led to two symmetrical parts of the hospital, which housed rooms for women and men. Corridors in both parts distributed traffic to multi-person halls. At the end of the foundation, an extensive chapel was placed (Fig. 2). 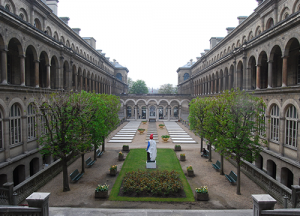 The layout of the Hôtel Dieu hospital found many followers, not only in France but also in other parts of Europe. In the second half of the 19th century, a type of pavilion hospital appeared. This solution resulted from the need to separate patients with different diseases and place them in separate buildings, thus minimizing the risk of infection. It was a big change compared to the previous solutions where patients with different symptoms were placed in a common room. The use of the pavilion model in the construction of hospitals was associated with the development of bacteriology at that time, especially with the identification of bacterial dispersal routes. Large rooms for patients, necessarily equipped with windows on both long sides, ensured good ventilation of the rooms. Additionally, expensive and complicated ventilation systems for patient rooms were constructed. The relationship between the effective treatment of wounds and injuries and good oxygenation of patient rooms was understood.

The precursors of pavilion hospitals were military field hospitals, which were created as provisional units in times of wars in various parts of Europe. An example is the barracks hospital in Berlin Moabit (Fig. 3). 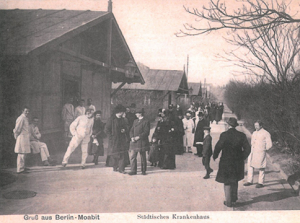 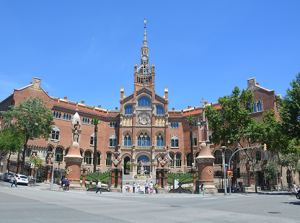 The hospital, funded by banker Paul Gil, was designed by architect Luis Domenecha Montaner. The hospital was built to occupy the entire city quarter, it consisted of a two-wing administrative building located at the front and eight pavilions arranged symmetrically on both sides of the axis defined by the administrative building. The whole was completed by the construction of the technical part of the hospital. Each of the richly decorated pavilions for patients from various fields of medicine contained a large, high room for about 30 patients arranged on both sides of the longitudinal walls. Underground corridors provided traffic between pavilions and other buildings.

One of the last pavilion hospitals in Europe was a hospital built in Brussels in 1911-1923 thanks to a donation by the financier and philanthropist Georg Brugmann. The designer of the hospital was the architect Victor Horta, who adopted the pavilion model to ensure the best hygiene in the hospital. The hospital was designed for 700 beds in 10 one-story pavilions, five on each side of the central communication axis. The axis begins with administrative and medical buildings with a treatment area. The hospital ends with a hospital chapel with a morgue. Patient pavilions have been designed with care for the ventilation of large patient rooms. This was achieved thanks to ventilation systems which allowed to maintain air circulation in patients’ rooms thanks to high decorative chimneys above each pavilion (Fig. 5). 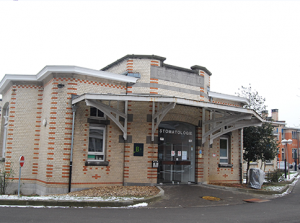