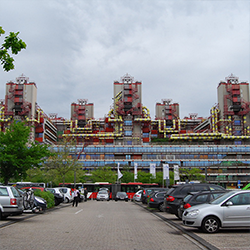 Hospitals built in the 1950s and 1960s can be divided into two models of hospital buildings:

The patient rooms, consisting of one to six beds, were equipped with washbasins, in few cases with their own balconies and were located on the south side.

The main problem to be solved in this type of hospital was the collision-free routes of communication routes. A novelty was the layout of the ward part of the hospital using a system of two corridors, where rooms in the ward do not require daylight, they were placed in the middle between the corridors leading to the ward rooms, which significantly shortened the access routes in the ward.

Berlin Benjamin Franklin Clinical Hospital is a good example of a vertical hospital layout (Figure 10). The Benjamin Franklin Foundation on behalf of the US government funded the construction of a hospital. The designers were American architects Curtis and Arthur Q. Davis and Berliner Franz Mocken. The hospital was opened in 1968. It was the largest hospital complex built at that time in Europe. The usable area of ​​the hospital is 160 thousand square meters with 1,350 beds. In the base structure, which is four-storey high – a plinth with atria, there are treatment rooms, consultation rooms and teaching rooms. Above them was erected two multi-storey buildings intended for the stay of the sick. A building for surgical treatment was placed between them. 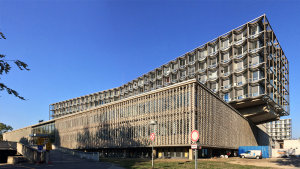 An example of combining the two discussed types of hospitals is the gigantic University Hospital in Aachen (RWTH Aachen), designed by architect Wolfgang Weber in 1965 and built in 1969-1982 (Fig. 11). The multi-specialist hospital could accommodate 1,600 patients. This enormous hospital, consisting of bed sections arranged on a four-story pedestal with medical and technical rooms, forms a vast block separated by atria. To this day, the hospital in Aachen is one of the largest in Europe. 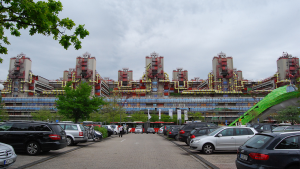 factors include the development of communication. Until the development of the automotive industry, the hospital had all the functions necessary for its operation. The development of efficient and cheap car communication made it possible to transfer some functions supporting the operation of the hospital outside the hospital, where they can be performed by external companies. For example, the production of infusion fluids in hospital pharmacies was taken over by the pharmaceutical industry, concentrating this type of production. The same happened with the sterilization service. Kitchens and the so-called auxiliary farms producing food for the needs of the hospital. The nutritional role was taken over by enterprises supplying hospitals with meals for the sick, delivered at feeding times. A similar process involved washing hospital linen. The process of taking over and concentrating services for hospitals is developing and also applies to those services that are directly related to the treatment process. Currently, many hospitals entrust laboratory testing to external laboratories. Similarly, the diagnostic process is concentrated, e.g. X-ray, tomography or magnetic resonance imaging.

Hospital buildings in their original programs had spaces intended for these, no longer performed today, functions at the hospital site. Some of the functions directly related to the treatment have lost their importance or have been abandoned due to the negligible therapeutic effects. This is what happened with the widely used sun loungers and balconies used for light therapy, popular even in the period before World War II. The development of much more effective antibiotic therapy resulted in the resignation from building hospitals with terraces or gigantic windows. Moving some of the services accompanying the treatment process to external companies over time, freed up a number of areas that are nowadays useful for adaptation to functions related to new technologies.

Fig. 10. Steglitz Hospital, view of the building with rooms for patients on the north side, P. Gerber, 2018