Accueil » Member's Corners » Hospital reform in Germany, it would be nice to have less populism 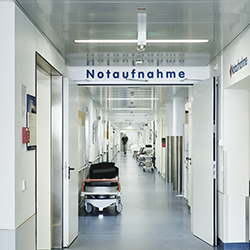 “Within six months, a proposal for a new remuneration and planning structure must be developed and then transformed into a legislative proposal with the Länder. The basis here must be joint legislation in which the federal government, parliamentary groups and the Länder work together”, said Prof. Karl Lauterbach, Federal Minister of Health.

“For a real structuring of hospital planning, the Federal Ministry of Health needs to get the important players on board”, said Thomas Bublitz, BDPK (German Federation of Private Hospitals) Chief Executive in an article published in the trade journal f&w, issue 01/2023. “For the legislative implementation phase, I would like to see a sincere discussion by the Ministry of Health, also with stakeholders and the federal states, for a meaningful interlinking with hospital planning. It would also be nice to have less narratives and less populism.”


Some starting points for meaningful effects of a hospital reform:

Underfunding of operating costs: This now leads to negative annual financial statements for more than 60 percent of hospitals, and many are at risk of insolvency. Incidentally, the previous federal governments have been largely to blame for this.

Underfunding of investment costs: The federal states still only finance about 50% of the investments needed for a sustainable hospital structure. This means that hospitals have to make a profit in order to repay the loans for their investments, and this applies to all hospitals, regardless of ownership. Hospitals can only get out of the underfunding dilemma if they treat more patients. This calculation has not worked for years. Nationally, the number of patients treated in hospitals is falling, and even proportional reserve budgets do not change this.

Case-based lump sums: The Diagnosis Related Group (DRGs) introduced by Karl Lauterbach have been criticised for leading to cheap medicine. This should not be the case: The quality of medical care and medical progress have developed dramatically during the DRG phase over the past 20 years. Diagnosis, imaging, minimally invasive surgery, robotic assistance, laboratory techniques, new drug and radiation therapies, reduction of infections and preventable incidents, specialisation and the creation of centres have all led to a considerable improvement in the quality of care. Patients have benefited through higher survival rates and improved quality of life.

Shortage of skilled personnel: due to demographic changes but also to a changing social structure, the number of available workers is decreasing in all sectors, including hospitals. In addition, young people are placing more emphasis on the work-life balance. For many years now, hospitals have been desperately looking for new staff, even abroad. The reform will not change this. Moreover, working in shifts 365 days a year is also demanding. Employees complain about teamwork as a loss of quality of life and are eager to get out of it. Why doesn’t the federal government create tax breaks for shift work in the police, fire brigade, rescue services and hospitals?

Bureaucracy: Bureaucratisation has now reached a daunting level. Medical and nursing staff complain that they spend about 40 per cent of their working time on documentation that seems pointless. So far, neither the reform commission nor the federal government are addressing this issue.

Hospital closures: We may have too many hospitals and some will have to be closed or converted into outpatient clinics. But where should we close and how do we differentiate between rural and urban care? To this end, the Commission recommends that all hospitals that do not have at least six intensive care beds that can be operated around the clock be converted into nursing-led observation centres. This would be the perspective for all hospitals that cannot prove they have at least 18 trained intensive care nurses. Especially in rural areas, there are doubts about the cooperation with specialists in private practice, which often no longer exists there. In what time frames do you have to think if you want to close hospitals at some locations and build up capacity at others? What investments are necessary for this and are the employees willing to travel further to work? Do they really experience improved working conditions in the new structures of larger hospitals or is the hamster wheel just a little bigger? What is the risk of reducing the number of hospitals in combination with the reservation of waiting times for necessary treatments?

Read the article in German