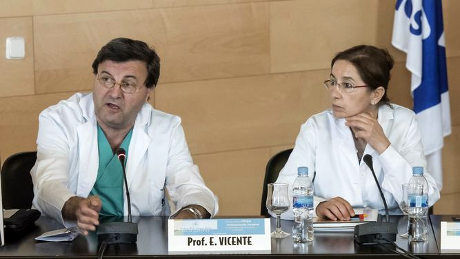 These are the first cases of Hereditary diffuse gastric cancer (HDGC) in the world treated with this technique. The intervention lasted 350 minutes and did not require transfusion of blood products.

The patients were mother and daughter and both had an inherited predisposition syndrome to cancer with an autosomal dominant inheritance pattern. Hereditary diffuse gastric cancer (HDGC) is caused by germline mutation of the CDH1 gene. Mutation carriers have a more than 80% lifetime risk of developing gastric cancer as well as an elevated risk of lobular breast cancer. Once an individual has been identified as a healthy career of a disease-causing mutation, the advice is to consider performing prophylactic total gastrectomy regardless of the endoscopy findings.

Robotic surgery system (RSS) was introduced as an advanced platform studied to overcome the technical limitations of conventional laparoscopy with many advantages: articulated movement of the robotic instruments, the elimination of tremor and the 3D vision.

“The most interesting aspect of the surgery performed is to have been able to associate two modern concepts that have revolutionized medicine in general and surgery in particular: preventive surgery and minimally invasive surgery, where robotic surgery is the most important component”, say the experts.

To our knowledge, these patients represent the first cases of HDGC detected by robotic prophylactic gastrectomy in the world. Both patients are actually in good clinical condition.