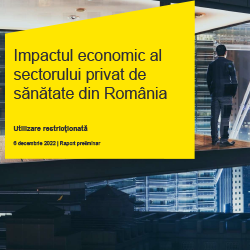 7 out of 10 Romanians seeking a medical service in a private facility need an outpatient consultation, while 20% of patients access medical imaging services. This is one of the conclusions of the study “The economic impact of the private healthcare segment in Romania”, carried out by EY Romania, at the request of the Patronage of Private Medical Service Providers – PALMED, which argues the decisive role that private medical units play in preventing and treating illnesses, with numerous consequences from both a social and economic point of view.

Preventable and treatable mortality rates have fallen by 9.4% and 8.4% respectively over the last 6 years, due to the increase in the population’s income, access to education and information campaigns. The development of the private sector, which has a priority focus on prevention, has made a significant contribution. A novelty of the last year is the fact that 0.5% of all consultations carried out privately were carried out via telemedicine. On average, in 2021, a patient who arrived in a private medical unit carried out 1.5 consultations and more than four laboratory tests.

In terms of economic data, Romania remains among the European countries with the lowest share of health expenditure in GDP, which puts the long-term sustainability of the health system at risk. We allocate 6.3% of GDP to health, with Luxembourg being the only European country with a lower share of GDP, at 5.8. At the other end of the scale is Germany with 12.8% of GDP, followed by France with 12.2%. A similar share for Romania is allocated by Poland, 6.5%.

Approximately 80% of health expenditure comes from public sources. The private segment finances 20% of the health system through direct payments from the population, medical subscriptions and voluntary insurance.

The market for dental services is financed by the public health segment at a rate of only 5%, compared to the European average of 31%. The average number of dental consultations in Romania is 0.3, compared to the EU average of 0.9. After us comes Cyprus, with 0.11. At the opposite pole is the Netherlands with 2.5.

With more than 56,000 medical establishments, the private segment is making a decisive contribution to the development of the medical infrastructure by setting up and expanding establishments.

The study also argues that there has been significant investment in medical equipment purchased mainly in medical imaging centres, laboratories and dental surgeries. As a result, investment in the private healthcare segment has doubled in the last 10 years to 0.2% of GDP. The turnover generated by the private healthcare market represents 0.7% of the turnover generated at national level.

The Employers’ Association of Private Healthcare Providers in Romania – PALMED, through the voice of its President Cristian Hotoboc, is ready for a constant, constructive dialogue based on correct and reasoned principles, which will provide coherence, sustainability and predictability in the policies of the Romanian healthcare system, needs derived both from a thorough analysis of the data provided by the study presented, and from the reality we face when interacting with the health system, as patients, regardless of the form of ownership of the medical unit, the objective of all the factors involved being direct, rapid and efficient access to the necessary medical services.