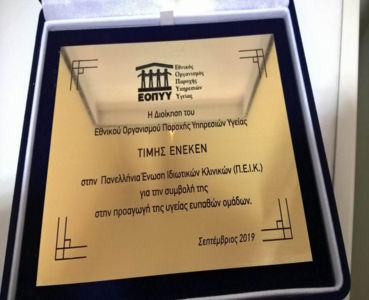 On September 5. 2019, the Panhellenic Association of Private Clinics received an award for “its contribution to promoting the health of vulnerable groups”, with the signing of a Memorandum of Understanding (MOU) for the administration of oncology medicines by Private Clinics.
A partnership has been settled. From September 5. 2019 ownwards, 21 Attica Clinics will cover 2,000 patients per month and will extend throughout Greece, as well as to other treatments that are being delivered in Private Clinics.
The award was presented by the Minister of Health Mr. Cecilia, with the presence of Deputy Minister Mr. Kontosamanis, the President of EOPYY (Greek Organization of Social Security) Mr. Plagiannakos and the Vice President Mr. Karpodini. Mr. Sarafianos, President of the Panhellenic Association of Private Clinics received the award.
The event was covered by all the TV channels in the country and broadcasted snapshots on all the Newsletters.
Such initiatives by the Government and the political leadership of the Ministry of Health will be supported and co-operated by the Panhellenic Association of Private Clinics.
https://webtv.ert.gr/ert1/themata/dorean-chorigisi-ogkologikon-farmakon-apo-idiotikes-klinikes/
https://www.youtube.com/watch?v=Tras9yQIsqE from 30:30
https://www.antenna.gr/watch/1313796/ant1-news-05092019-stis-19-30 from 00:51 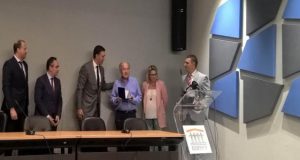