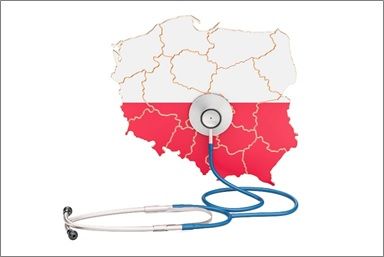 NOVEMBER 2019. The Polish Association of Private Hospitals (OSSP) has released its 4th sectoral report, giving an overview of the position of its member hospitals within the Polish healthcare landscape.

Private hospitals within the “Hospital Network”

In 2017 the principles of hospital financing were changed in Poland. In October, the Ministry of Health introduced a healthcare reform that led to the constitution of a “Hospital Network”, gathering 594 hospitals financed by public funds in the form of a lump sum. Among the 594 hopitals, 78 are non-public entities and 31 of them are private hospitals, affiliated to the Polish Association of Private Hospitals (OSSP, UEHP member). The requirements to be part of the “Hospital Network” (have specific types of wards and/or an emergency service) led automatically to the exclusion of many private hospitals (small, single specialty units…)

Hospitals included in the network have guaranteed access to public financing in the form of a lump sum payment for a four-year period, which allows more stable long-term projections. Hospitals that were not included in the Network (355 entities including 339 non-public Hospitals) can apply for contracts via tenders announced by the National Health Fund, in order to obtain income from public funds (7% of NHF budget).

According to a study on Health Policy “Poland is characterized by the overcapacity of the hospital sector, which is accompanied by deficits in out-patient care provision. Although the hospital network regulation provided financial incentives for hospitals to shift from in- to out-patient services, the new system did not include one-day procedures, which continued to be contracted separately (outside the network) … One of the major controversies concerning the reform’s design and implementation is the lack of any quality of care, health outcomes, and/or efficiency measures in the network inclusion criteria.” 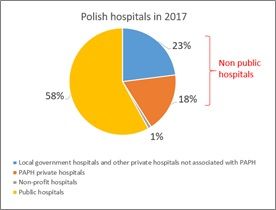 According to the statistics of the Ministry of Health, in 2017 there were 930 hospitals in Poland (public : 58%, private : 38%). Private hospitals associated with the Polish Association of Private Hospitals (OSSP) represented about 5% of all hospital beds in Poland (18% of the total number of hospitals). OSSP private hospitals employed approximately 13% of doctors and 7% of nurses and midwifes.

The mutation of the private hospital sector

The hospital sector is shrinking. This unfavourable phenomenon is confirmed by a decreasing occupancy rate of hospital beds : 51.3% in 2017 versus 65.8% in public hospitals (77 % in average in the EU). Nevertheless, the Polish private hospital sector has the infrastructure, medical equipment and qualified medical personnel to accommodate up to 20% more patients. OSSP private hospitals who participated in a survey confirmed that the average usage of some medical equipment reached 70% only.