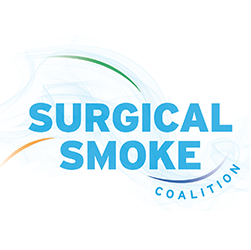 Brussels, April 2022 – The Surgical Smoke Coalition, a pan-European movement created to raise awareness of the risks faced by healthcare professionals due to exposure to surgical smoke and share policy and technical solutions, is delighted to be joined by seven additional members.

André Loose, member of the Coalition and ATA|OTA Chairman1, commented: “Surgical smoke contains a variety of toxic substances, which are recognised as harmful to humans by the EU. According to studies2, the ablation of 1g of tissue produces a smoke plume with an equivalent mutagenicity to six unfiltered cigarettes. A day in the operating room is equivalent to the consumption of more than 27 cigarettes. Doctors, nurses, and technical assistants typically work 8-10 hour shifts in operating rooms, leaving them most exposed to these harms. It is therefore important to raise this issue and call for concrete policy changes.”

“Less than one year after its creation, the Surgical Smoke Coalition has doubled in size and grown its membership with high-profile members, who have decided to hold policymakers accountable for putting in place the right policy and technical solutions to prevent surgical smoke hazards for healthcare professionals.”, said May Karam, Chair of the Surgical Smoke Coalition and Member of the European Operating Room Nurses Association (EORNA).

The next planned activity for the Coalition will be to publish a policy report, “Surgical Smoke: An underestimated health hazard”, in the upcoming weeks; the report will include concrete recommendations for European and national policymakers to implement.

MEP Dennis Radtke (EPP, Germany), political Co-Chair of the Coalition, said “I am glad to join the Surgical Smoke Coalition and contribute to strengthening the protection of healthcare professionals working in operating rooms. I will use my mandate at the European Parliament to ensure surgical smoke stays high on the agenda”.

Surgical smoke can cause direct harms from the particles it contains. It can cause irritation to the eyes, respiratory tract, and skin of hospital operating room staff and has been linked to diseases including occupational asthma and chronic pulmonary conditions.

Some countries have clearer legislation than others to safeguard the health of healthcare professionals. For example, Denmark was one of the first and few countries in the world to implement legislation applicable to surgical smoke, making it mandatory for employers to install extraction systems that remove smoke and other harmful substances as close as possible to the source. Further afield, in the United States, an increasing number of states have passed specific legislation requiring hospitals to use dedicated evacuation systems to tackle surgical smoke.

If you have any questions or wish to know more about the Surgical Smoke Coalition, please contact: secretariat@surgicalsmokecoalition.eu
—–
1 ATA|OTA is a membership organisation representing the interests of all professionals working in surgical-technical assistance roles nationally (Germany) and internationally. More to be found here: https://ata-ota.org/
2 Hill, D. S., et al. “Surgical smoke–a health hazard in the op erating theatre: a study to quantify exposure and a survey of the use of smoke extractor systems in UK plastic surgery units.” Journal of plastic, reconstructive & aesthetic surgery 65.7 (2012): 911-916.