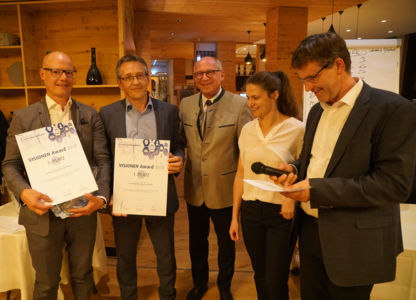 Three outstanding innovations by private clinics have been rewarded by the Austrian Private Hospitals Federation in the frame of its second Congress in October.

The first prize has been awarded to the Tyrolean private clinic Hochrum for its Surgical Skills Institute (SKI). SKI is a training and research facility, which will be used for advanced training for OR staff, the testing of new implants or instruments as well as research projects.

A video transmission system between the OR, laboratory and lecture halls has also been foreseen.

The second prize awarded the Ebody Ärzte App, an application developed by physicians from the private clinic Maria Hilf in Klagenfurt. This digital tool enables practitioners to access patients medical data, in a safe way and everywhere. Doctors not only keep track of treatment schedules, but also have access to findings and diagnosis.

The third place went to last year’s winner The Rehabilitation Center Münster for a therapeutic concept that supports the treatment of multiple sclerosis patients by learning a foreign language.

‟The level of submissions was particularly high this year”, said Dr. Josef Macher, President of the Austrian Private Hospitals Federation. ‟From employee-oriented projects to innovative therapy and nursing concepts to the development of evidence-based studies, the jury of the award has received a wide variety of submissions. The first-class quality that characterizes Austria’s private hospitals is significantly influenced by a continuous development and technical progresses – but above all by the initiative and know-how of our employees.”