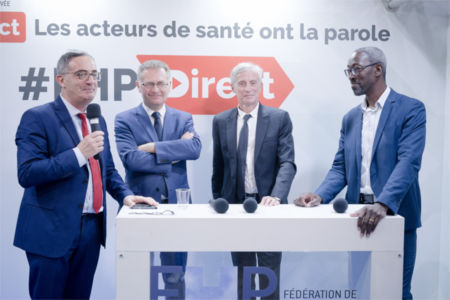 The Federation of Private Hospitalization (FHP) was present this year again at the international congress “Paris Healthcare Week” (PHW) from May 21st to 23rd in Paris. This must-attend event for the profession, organized by the French Federation of public hospitals, usually gathers around 30,000 visitors and 850 exhibitors.

During this meeting which brought together a great number of actors from the health sector, the FHP’s president, Lamine Gharbi, and his team welcomed the visitors on the federation’s exhibition stand, which was located in the Institutional Space of the congress, close to the Ministry of Health’s stand.

A TV studio set, called “#FHP Direct” and animated by the journalist Pascal Maurel, allowed many personalities to express themselves. These debates were then rebroadcasted on Twitter, Facebook and LinkedIn.

Key topics for the french hospital sector were discussed at roundtables, such as the new health law, digital health, quality of care, or the medical practice of tomorrow.

Preceding the European elections, one of the roundtables was devoted to the theme “Can Europe be the future of patients?”. It was attended by Dr. Paul Garassus, President of UEHP.