Due to long communication routes between individual pavilions, which complicated the service of patients, in the 20th century the construction of pavilion hospitals was abandoned. Just as the problem of disease transmission between patients was solved by creating a hospital divided into pavilions isolated from each other for different groups of patients, the problem of infections as a result of surgical procedures was unsolved until the end of the 19th century. Until the end of the 19th century, surgical procedures were burdened with great risk, mainly due to postoperative wound infections. A number of new solutions changed the possibilities of the development of surgery at the end of the 19th century. First of all, the introduction of inhalation anaesthesia with the aid of ether, introduced by William Green Morton in 1846, or with the use of chloroform, introduced by James Young Simpson in 1847, allowed to improve the conditions for conducting surgical procedures.

In 1865, British surgeon Joseph Lister introduced the concept of “antiseptic”. According to Lister, “airborne microbes” discovered by Louis Pasteur enter the surgical wound, where they can cause infection. It was not until the 1880s that the root causes of wound infection were recognized. It has been proven that disease germs were transmitted mainly through surgical instruments, on the hands of medical personnel and through contaminated dressings. This discovery developed “asepsis”. Tools and dressings were then sterilized in devices under the influence of hot steam. Devices such as operating tables and surgical instruments were made to be capable of being disinfected with germicides. Washing hands before surgery has become the norm, and surgeons have become used to changing clothes before starting surgery. Thanks to the introduction of asepsis to the procedure, the course of the surgical procedure as also the development of effective methods of anaesthesia in the late nineteenth century can was to successfully perform complex surgical procedures. This laid the foundations for the rapid development of surgery.

The development of surgery required the creation of a properly designed operating room with back-up facilities. The light illuminating the operating field was natural light. In order to provide adequate illumination, operating rooms were built next to the external walls of the hospital buildings, surrounded by a glass bay (Fig. 6). New achievements in sterilization of tools and dressing materials required the construction of rooms with increased cleanliness that could accommodate the necessary equipment. New rules for conducting surgical procedures resulted in the need to develop a model of an operating room, and soon an operating theatre. 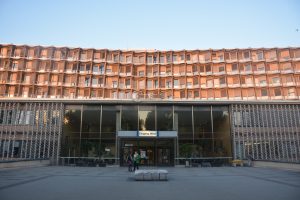 The architecture of hospitals in the first half of the 20th century was influenced by many factors, including two world wars, as well as population growth in large cities and the economic crisis. The above-mentioned events brought with them huge social problems. Due to malnutrition and overpopulation, the number of tuberculosis infections, which has become the main cause of mortality, increased dramatically.

From the beginning of the 20th century, the corridor hospital became a new type of hospital construction, in which separate rooms for beds were designed for each medical specialization, connected by a corridor allowing movement between rooms within one building. The rooms for patients were usually located on the south side. Other rooms, such as nursing rooms, hygiene and technical rooms from the north. One of the first systems of this type was built in Berlin’s Charité hospital (Fig. 7), where many of this type of buildings were designed by the architect Kurt Diestel in the years 1895 to 1915. Most of them, after renovation and supplementing with new functions, are still used today as a hospital. 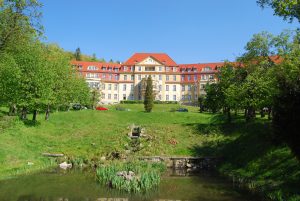 The corridor system was often mixed with patient rooms from the pavilion model. A new type of buildings with corridors has been supplemented with smaller rooms for new medical functions, such as diagnostics, including X-ray, laboratory medicine and bacteriology.

An example of a corridor hospital model implemented in Lower Silesia (Poland) was the construction of the Bukowiec hospital in Kowary near Jelenia Góra (Fig. 8) or the St. Antoni hospital in Ząbkowice. 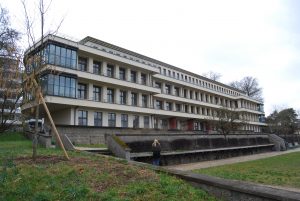 In Germany, the National Socialists developed a highly specialized hospital treatment program for members of the army, air force and navy. Hospitals for military convalescents were an example of a corridor model from that time, which preferred the southern location of patient rooms. From 1938 until the late war years, many military hospitals were built in Germany, including many in Lower and Upper Silesia. The architect, Hermann Distel, became an expert in the construction of hospitals in the Third Reich. There were 21 projects under Distel’s management, including in Lower Silesia, Wrocław and Głogów.

Until the end of World War II, more or less decentralized complexes with architecturally separated specialist divisions were preferred.

Only after 1960, after the first phase of post-war reconstruction, there was a time of changes in the architecture of hospitals. The hospital space for all specializations together, without division into individual facilities, began to be planned. After the transition phase, trends have increasingly focused on having related medical functions co-located under one roof.

Buildings of no more than 4-5 storeys were designed to ensure a sufficient number of terraces, verandas and green areas. In addition to optimal ventilation of the patient room, there is also air therapy and physical therapy in its broadest sense, which have become a permanent element of general hospitals. This meant that, in addition to placing rooms with beds on the south side, they were additionally equipped with floor-to-ceiling windows and additional verandas.

The idea of ​​placing hospital wards in terraces, one above the other, was continued until World War II. An example is the Lory Haus in the Inselspital complex in Bern, Switzerland (Fig. 9), where 4 hospital storeys received large balconies to the south, forming uniform strips on each storey.

The response to the significant increase in tuberculosis incidence in the early twentieth century were projects to build large hospital complexes where it was possible to isolate infectious patients and conduct the treatment process. The first example of a large city-hospital was the Berlin-Buch complex, built in 1906, consisting of 45 buildings on an area of ​​70 hectares. A hospital outside the city isolated the sick from the healthy community. Architect Ludwig Hoffmann and his successor, Martin Wagner, designed and supervised the construction of a complex of hospital and accompanying buildings in Buch near Berlin for approx. 2,000 patients mainly suffering from tuberculosis. A similar city hospital complex was built in Beelitz near Berlin as a team treating lung diseases, especially tuberculosis, according to the design of the architect Heino Schmieden. It was intended for 1,200 patients.

The development of steam sterilization, X-ray and laboratory medicine, as well as the desire to shorten the access routes in the hospital resulted in the need to concentrate the course of medical processes. At the same time, the number of diagnostic and therapeutic procedures increased, which required the use of more and more devices and medical equipment. New premises were needed for these processes. For example, in the 1920s, electrocardiography entered the clinic to study heart disease, and new device-based performance testing methods began to be used.

The necessity to integrate more and more medical processes required shortening access routes for both patients and doctors. Long roads leading from patient rooms to operating buildings, laboratories or X-ray departments were found to be burdensome for both patients and medical staff. The development of construction offered new solutions in construction technology, especially in the construction of high-rise buildings. Steel or reinforced concrete structures, connected with elevators, created technical conditions for hospitals, enabling the location of hospital wards on subsequent floors. Electrically powered elevators made it possible to significantly shorten the routes of transporting patients around the hospital premises. At the beginning of the 20th century, the development of bacteriology in two decades explained the routes of transmission of the most important infectious diseases such as diphtheria (1873), leprosy (1880), tuberculosis (1882), cholera (1884), typhus (1884), or plague (1894).

They learned how to effectively prevent the spread of diseases by using such simple methods as proper disinfection and sterilization. It was understood that the majority of infections in hospital walls were caused mainly by poor hygiene. New official hospital hygiene orders justified by bacteriological diagnoses could be carried out in every hospital building. The economic calculation has become more and more important due to the dissemination of medical care and the increase in its costs, made the pavilion system be perceived as requiring too much staff and energy. As the number of patients in hospitals increased, it was necessary to separate the paths of patients, visitors, staff, laundry and food supplies. The fulfilment of these requirements was possible thanks to a multi-storey building, in which roads could be shaped vertically and horizontally, separated by lifts and staircases.

One of the first multi-story hospitals on the European continent was built in 1933-1935, by building the Beaujon Hospital in the town of Clichy near Paris, according to by Jean Walter, Ploussey and Cassan. The hospital, with over 1,000 beds, was a building complex, as well as outpatient and inpatient health care. A similar scale is presented by the London Clinic and Nursing Home. A complex of eight- and eleven-story buildings filled the quarter between Harley Street and Devonshire Place.

Hermann Distel’s utopian project for the complex remained unrealized Mammoth-like skyscrapers 1941, which were to be located near Reichssportfeld, on the new Reichsstrasse Berlin-Spandau, to replace the Berlin University Clinics Charité, as part of a project to redesign the space of Berlin. Distel, in consultation with Chief Building Inspector, Albert Speer, proposed a “university clinic” with 3,200 beds, which could educate 5,000 medical students and visited by 15,000 patients daily. This gigantic clinic, however, remained in the area of the architect’s plans.

After the end of World War II, in addition to rebuilding the damaged ones, a number of new hospitals were built. Architects, doctors, engineers and politicians responsible for the construction of hospitals were aware that the hospital as a central healthcare institution should undergo a constant process subordinated to the development of techniques and methods of treatment. From the mid-1960s, low-rise construction was giving way to multi-storey construction. Infectious diseases and tuberculosis wards with their characteristic features, such as balconies and terraces, which had been a significant feature of hospitals until World War II, lost their importance in the post-war period.

The era of new industrially produced drugs – antibiotics, made it possible to control infectious diseases from the 1950s. Extensive vaccination programs in many European countries, contributed to this. This allowed for a gradual reduction of rooms intended for infectious wards and limiting their number to only a few rooms in the hospital.

A number of technical solutions were introduced to support the process of treatment and maintenance of vital functions (artificial dialysis, heart-lung devices, vital functions control devices), which required the hospital architecture to organize a new space organization, in particular the centralization of spatial systems. In larger hospitals, there has been a functional division into: the space of medical services consisting in diagnosis and treatment, and the space intended for patient care. Individual hospital wards had between 25 and 35 beds. Larger hospitals, with between 600 and 1,200 beds, already in the mid-1950s consisted of no less than 12 specialist departments. In addition to clinical specializations, since the 1960s, the demand for interdisciplinary departments such as anaesthesiology, radiology, laboratory medicine and pathology has grown in county and city hospitals.

Treatment progress, especially the improvement of surgical techniques with progress in pharmacology, since the 1960s, it has resulted in a reduction in the average length of stay in a hospital for patients from an average of 20 to 10 days. This allowed for the same number of beds and staff to serve a greater number of patients.