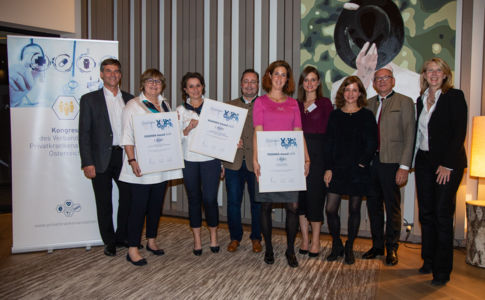 OCTOBER 2019. On 9 October the Visions Award of the Austrian Association of Private Hospitals (VPKA) was presented for the third time. Within the framework of the annual VPKA Congress, outstanding forward-looking projects in private clinics are honored. This year’s winner is Vienna Private Clinic (Wiener Privatklinik), which was the first clinic in Austria to adapt the innovative concept of “One Minute Training” and has since successfully implemented it. The PremiQaMed private clinics came second with videos on patient safety. 3rd place also went to Wiener Privatklinik, which developed its own training concept for nursing interns.

“Austria’s private clinics are thinking towards the future”, announced Stefan Günther, General Secretary of VPKA. For the third year in a row, the member clinics were invited to submit progressive and trend-setting projects that were initiated by the various professional groups in the course of their daily work. “Never before have there been so many submissions as this year,” said Günther. “We are pleased that our members promote the innovative strength of their employees so strongly. This always benefits the patients in the end.” 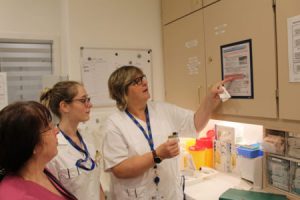 Wiener Privatklinik was able to assert itself among the numerous applicants: The concept of “One Minute Training” (originally “One Minute Wonder”), originally developed and validated in England, was adapted and implemented for the first time in Austria under the direction of nursing scientist Karin Klas. It offers effective methods for integrating knowledge transfer in nursing into everyday working life. In a highly condensed form, learning boards convey specialist knowledge that can be read and recorded within a minute. The cards are placed at locations with regularly recurring waiting times, such as in the intensive care unit during a blood gas analysis. The nursing staff can also refresh elementary knowledge, such as emergency handling, without additional effort.

Ilaria Giannico, Secretary General of UEHP and member of the jury, confirmed the selection of the winning project: “The concept of One Minute Training can significantly relieve the resources of the staff! In addition, the treatment and safety of the patients are increased by up-to-date knowledge. I was impressed by the great impact that can be achieved with comparatively little effort. I am convinced that this concept will be imitated in many clinics in the future”.

Patient safety was the focus of the 2nd place project: Under the motto “Check in and feel safe”, Teresa Mang, Service Quality Representative at PremiQaMed Clinics, developed short films for patients based on the safety videos on the airplane. In the videos, the sensitive topic of safety is presented in such a way that the patients feel being in good hands, but not unsecure.

Wiener Privatklinik was also able to score again in 3rd place with a training concept for nursing interns developed by nursing director Gabriele Giehser and nursing scientist Karin Klas. The training concept “nursing interns optimally cared for”, not only presents the clinic as an attractive employer, but also conveys a realistic picture of the nursing profession for career starters and is a professional support for interns – a project with future potential in times of lack of nursing staff.