Accueil » News » We excel in times of crisis 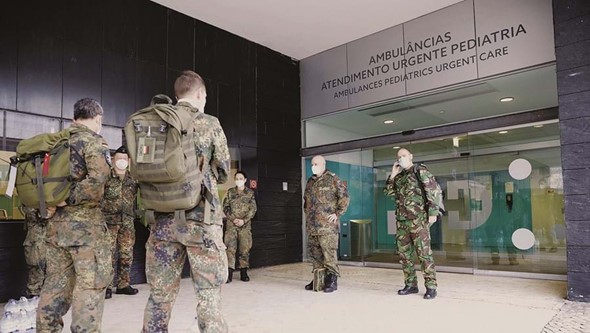 It seems that Jean Monnet’s prophecy continues to be true: “Europe will be forged in crises and will be the sum of the solutions adopted for those crises“. In 2020, the COVID-19 pandemic threw Europe – all of Europe and, indeed, the whole world – into the worst health crisis of the last 100 years, with many social and economic consequences.

In the immediate aftermath, still in shock, unilateral action prevailed (there was talk of diversion of ventilators, of a ban on exporting medicines, of speculative PPE purchases, etc.) but thankfully, we soon realized that the problem was widespread and that together we would solve it better. The pandemic had waves and did not reach all countries at the same time, which made it possible to learn from others and adjust resources as needed.

As far as Portugal is concerned, the first wave was relatively benign, the second one hit us in October in the north of the country and shortly thereafter we entered this tougher phase where since mid-December we have had several days with more than 1,000 new cases per million inhabitants. This is a time of great tension on the Portuguese health system, with an unprecedented number of hospitalized and ICU patients. Portugal began this crisis with some fragile conditions, namely a marked ageing and dependence of the population and an installed health capacity below the European average (in terms of beds, ICUs, and nurses per 100 000 inhabitants). In a particularly difficult situation, the entire system is fully involved in the health needs of citizens. In Portugal there is an ideological bias against private participation in healthcare, but in a country with limited resources it is even more essential that no capacity is wasted.

From the outset, Private hospitals have been available to participate in the national fight against COVID-19 and to collaborate with the NHS under the terms that the authorities deem appropriate. In addition to the provision of equipment and the provision of hospitals and complete wards, we are receiving patients (COVID and non- COVID) from the NHS and there are operating theaters being used by medical teams from public hospitals.

After some weeks during which some tried to alarm the population with ideological arguments, the Portuguese Prime Minister, António Costa, was adamant when, while visiting a private hospital, he said “I would like to say a word of thanks here today, because the agitation of the political debate is one thing, but reality is another. Since March we have been in contact, we have been working together, and the NHS, private hospitals, the social sector, and the Armed Forces, have been mobilized whenever necessary to respond to this pandemic “.

The crisis ended up creating relationships, ending taboos, and getting people to work together. As President Joe Biden said a few days ago: “we are not talking about politics, we are talking about saving lives”.

Likewise, we witnessed a movement of international solidarity with Germany, Austria, Luxembourg, and Spain offering to treat Portuguese patients, if necessary.

On February 3rd, Portugal received the support of a medical team composed of 26 German health professionals. This is an example of collaboration between 2 friendly countries, but also collaboration between sectors because German professionals came to treat patients from public hospitals, but it was a private hospital that, at the request of the Ministry of Health, welcomed them. In the words of the private hospital, “for Luz Saúde, this is a moment of absolute commitment to the country, to the Portuguese people and to the national health system”.

As the Portuguese Minister of Health has just stated, “There are many lessons that will come out of this pandemic and the need to work side by side is one of them. If it were not for our joint ability to speak to each other, to get organized, to build bridges, we would certainly not have been able to address the needs of so many patients and families”.

The Portuguese philosopher José Gil wrote an essay a few days ago calling for unity “Because only united will we be able to resist and, despite all the losses and wounds, perhaps come out stronger from this catastrophe”.

We are learning from this lesson and, in Portugal as in Europe, we want to get out of this pandemic stronger, with more integrated, accessible, and sustainable health systems.

President of the Portuguese Association of Private Hospitals (APHP)