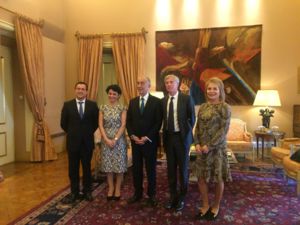 On 10th March 2017, at the occasion of UEHP General Assembly in Lisbon, Dr Paul Garassus was re-elected for a second biennial mandate as President of UEHP.

In this context, UEHP President Dr Paul Garassus and Vice-President Mrs Cristina Contel had the honour to be received by the President of the Portuguese Republic, Mr Marcelo Rebelo de Sousa.
During the meeting, organised by Mr Oscar Gaspar, President of the Portuguese Association of Private Hospitals APHP, Mr Rebelo de Sousa expressed his full support to the activities of UEHP, particularly focusing on innovation and coordination of the different actors in the healthcare sector. Mr Rebelo also confirmed his attention and consideration to the private initiatives in health, a choice which has become essential for the modernisation of our National Healthcare Systems.
We congratulate Dr Garassus on his re-election and we wish him another brilliant biennal mandate, always on the frontline of the main battles at EU level!