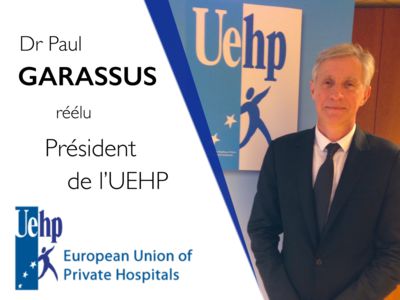 Dr Paul Garassus, is re-elected President of UEHP! Read his interview for “Interview and Report” published on 11 February 2019.
Dr. Paul Garassus, Chairman of the Scientific Council of BAQIMEHP, Vice President of the French Society for Health Economics, has been re-elected President of the European Union of Private Hospitals (UEHP) for a third two-year term.
Is there a European health project?
Half of the world spending in social protection is European even though we are only 500 million people. Our unique European model is very rich in terms of social protection, and only Japan is comparable to us. Within this bubble of welfare that attracts so much, the difficulties of access to care are minimal while they are major elsewhere, either because of the structuring of the system, or for financial reasons. However, the bubble is not homogeneous and even if we share the same humanistic values, we can observe differences: the rules of access to care are not identical between England and France for example or depend on the type of contribution scheme as in Germany.
Each European member state is in fact extremely protective of its own model, sheltering behind its social history, without really opening up to other experiences and in fact the borders remain watertight in terms of common initiatives. We recently met the Polish Secretary of State for Health, who acknowledged that he had learned more about Health in Europe in an hour with us than in a year in his ministry.
In fact, the Lisbon Treaty is very clear and the principle of subsidiarity as it relates to healthcare remains within the competence of each member state; this was clearly reminded to us last week by the European Commissioner for Health who received us. Europe can therefore issue principles and produce directives, but each member state remains master of its health system via this principle of subsidiarity. There will therefore not be “one” European health system, however coordination across member states must be put in place.
The European patient, wherever he lives, won´t he be seeking a Europe of quality in health?
On the issue of quality of care, the European approach is necessary but not sufficient. The key idea that will remodel the provision of care is the application of equivalent quality indicators in all member states. The patient will probably accept different coverage rates but the Hungarian patient will not accept to be treated worse than the German patient. The gradual homogenization of health systems will be achieved through equitable access to equivalent care. Naturally, it will require quality definition rules based on scientific data and common indicators but ultimately there is no reason for them to be different from one state to another. Health systems will evolve under this pressure induced by the European citizen who expects international standards of equivalent quality. We travel to Europe for professional, family or tourist reasons: we hope to have access to the same services everywhere.
What is the role of UEHP?
It is a platform of professional exchange. It helps reinforce approaches in terms of innovation and stabilize expertise through cross-contact. Above all, it creates a community that also needs reassurance in the face of a changing regulatory environment, but especially in response to economic pressure that limits relevant initiatives.

For developed countries, it is useful to understand that private health provision represents a useful tool for the optimization of health systems. It brings managerial performance, strategic investments and provides the quality of care expected in accordance to the level of social protection promised. At the same time, this platform facilitates the development of quality services in less developed European countries such as Romania and Bulgaria, but also in countries and regions wishing to join us, such as Moldova or the Balkans. Growth potential exists for private health provision because in these countries public funding alone is not sufficient to restore the supply of care services. In these countries there is a significant tendency in delegating pragmatic tasks by liberalizing private initiatives under contract with public social insurance.

Furthermore, UEHP is an essential lever for disseminating information from Brussels concerning directives and regulations, but also on possible funding. Two fields have opened up: innovation and digital (optimize your own digital systems and innovate) and training, with the creation of new professional degree programs related to personal assistance and patient pathway coordination. Europe has a structuring role on these issues and wants to play its part against GAFA or China. Private hospitals, highly eligible for programs, can take part.

How do you address this re-election?
I am re-elected for another two-year term. I am a physician first and foremost and my motivation is to use my experience as a caregiver and transpose it to the scale of positive regulation of all health systems. It is the same function at two different scales. The patient has to be feeling better when he leaves my doctor´s office, and he has to be feeling better when he leaves a European clinic. In 1974, I joined the Faculty of Medicine and since then I have travelled all over Europe, my personal investment is at the service of this fantastic progress that is the Europe of the citizens. But without a co-construction with committed health professionals, the regulator will not be able to find the right «fit». In this debate, even if I am not invited to take part, I will always invite myself to join!
Original interview in French: http://www.fhpmco.fr/2019/02/11/dr-paul-garassus-president-du-conseil-scientifique-du-baqimehp-vice-president-de-la-societe-francaise-deconomie-de-sante/