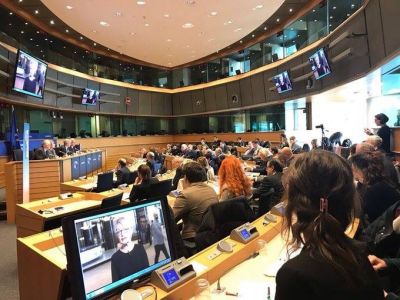 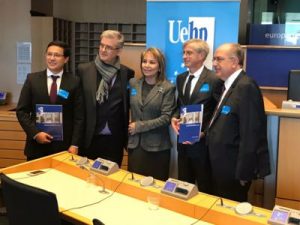 The private hospitals in Europe at the European Parliament

On 7th November, the European Union of Private Hospitals (UEHP) officially launched the first edition of its Factbook “Private Hospitals in Europe: Supporting Sustainable Health Systems”, a compendium of the private hospitals in Europe, supporting innovation, sustainability, quality of care and optimization of hospital performance.
The launch was held at the European Parliament in Brussels, thanks to the kind support of MEP Françoise Grossetete, Vice President of the EPP Group, who has been actively working on the mayor challenges in healthcare for years at EU level.
The topics debated were numerous and various, with a specific focus on transprency, improvement of quality standards in Europe, sustainability of our NHS (the so-called “do more with less”), fair competition between public and private sector, patient involvement and empowerment.
The presentation of the author of the Factbook, Mr Hans Mertens – European Health Expert, focused on the major issues and stereotypes he encountered while writing the book, giving the audience food for thoughts and different point of views with regard to the private sector.
Europe’s health systems are organised in very different ways and, unfortunately, this have so far made it difficult to compare system performance across borders and learn from best practices. Only recently has such a process begun, and it is developing very slowly.
However, they have more in common than what it is thught and they share a variety of common problems, such as the one of sustainability, the pressure from adverse demographics, the low economic growth and high growth in expenditure.
Best practices may differ depending on national tradition, but as the sustainability of the health systems is at stake this should not stand in the way of reform. As inadequate supply – resulting in long waiting times even for serious illnesses – and lack of public finance for sufficient investment in health systems are often a key problem, public and private partnership in health – notably in hospitals – is a way to increase sustainability.
There are many different ways in which such public-private partnerships can develop, and there are different sources of private capital that can be employed. But privately owned hospitals are viewed with suspicion from many sides – not for suspicion of low quality or low productivity – but more as providing poorer employment conditions and creating inequality in access.
However, the UEHP Factbook has found no evidence that there should be a systematically poorer employment record, but there is clear evidence that private hospitals in Europe do not create inequality, as the payer is generally using the same public health system that provides access to the public hospitals. Therefore, inequality is not created by the ownership of hospitals, but by the financing system – who pays.
As private hospitals – living and competing alongside public hospitals – creates more choice for patients and shorter waiting times for illnesses, including for example cancer, and in many cases provide same or better quality of results than public hospitals for less money, there are good reasons to give space for private hospitals in systems where they don’t exist so far and to develop the private hospitals in systems where they already provide their services. But to create a successful partnership with all its benefits, it is also essential that the system treat the private and the public hospitals on an equal basis, which is not always the case today.
The recent debate about health systems around the world, including in Europe, has focused on the value of outcomes of the health systems in relation to cost – the so-called Value Based Health Care (VBHC). To develop VBHC means focusing more on the patient’s satisfaction, accepting higher degrees of specialisation to create higher value, and transforming reimbursement systems from volume to quality.
The whole healthcare system, and indeed the patients, can benefit from this shift and there is no doubt that the private hospitals can play a key role in it and identify themselves as the model of the hospital of the future, (the so-called “Smart Hospital”), more efficient, more specialised, with the patient and his satisfaction at the center of it, always paying attention to cost containement and to the added value all NHS can and should give to their citizens.
The launch event saw the participation of the major stakeholders operating in the healthcare sector coming from all over Europe, as well as represenattives from the European Parliament and Commission. It was indeed a unique opportunity to discuss the major topics on top of the European agenda in healthcare, involving all of us, as the healthcare providers of the services of the future.
Read our press release here!
Watch the videos from the conference! https://www.youtube.com/channel/UCYV4oT9op0sdZdOiTYr8e4A
Watch the video of UEHP President commenting the conference! https://www.youtube.com/watch?v=Y3v52HGcSy4